Webcomic / I Was Kidnapped by Lesbian Pirates from Outer Space 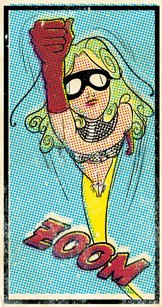 Susie Bell, an ordinary secretary on Earth, attracts attention of an alien raiding party of lesbian space pirates, who believe that she is the long-lost princess of their planet and abduct her. That's pretty much it for the main story.

I Was Kidnapped By Lesbian Pirates From Outer Space (IWKBLPFOS for short... don't look at us like that) is a webcomic written and drawn by Megan Rose Gedris and published on The Duck. First published in March 2007, it started off as a cheesy parody/affectionate pastiche of 1950's sci-fi pulp paperback comics featuring pirates, aliens, and lesbians. It later suffered from Cerebus Syndrome and has since gathered a large fandom, thanks to its regular updates (which isn't the case with so, so many other webcomics) and... oh, come on, it has alien lesbian pirates from space!

. Unfortunately, the creator had to end the comic and take it offline

due to some stressful rights issues with Platinum Studios (as explained in that post). The archives currently have no official home, but they can still be found on file-sharing sites.