All spoilers related to the theatrical version of Justice League and previous DCEU films are left unmarked. 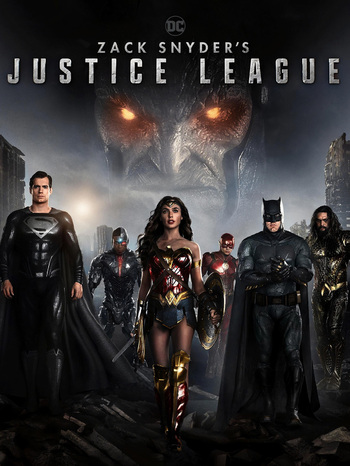 "You know, I never thought I'd see the defenders of Earth united, fighting as one." note Left to right: Superman, Cyborg, Wonder Woman, The Flash, Batman and Aquaman. Background: Darkseid
Arthur Curry: Fighting the devil and his army... in hell.
Barry Allen: I mean, this guy's probably fought hundreds of thousands of other super-beings on the other planets he's destroyed, right? And we have to assume he's won.
Bruce Wayne: I don't care how many demons he's fought in how many hells — he's never fought us. Not us united.
Advertisement:

Zack Snyder's Justice League, also known informally as Justice League: The Snyder Cut note The Fan Nickname that stuck, give or take a "Zack", is a superhero film initially released through HBO Max and various international streaming and VOD platforms in 2021. It is part of the DC Extended Universe and revisits the cinematic gathering of the iconic DC Comics Super Team, the Justice League, based on what was originally intended by director Zack Snyder and screenwriter Chris Terrio before the 2017 film was heavily modified without their contribution. It's developed by Warner Bros., DC Films, and The Stone Quarry. The project was taken out of The Shelf of Movie Languishment due to multiple factors, most notably a fan campaign to release it that had been going on relentlessly since the theatrical film's disastrous release in November 2017.

Following the events of Batman v Superman: Dawn of Justice, Bruce Wayne/Batman (Ben Affleck) gathers an alliance of metahumans, with the help of Diana Prince/Diana of Themyscira (Gal Gadot), as he feels the Earth needs protection against a threat from beyond the stars as prophesied by Lex Luthor (Jesse Eisenberg) after the death of Clark Kent/Kal-El/Superman (Henry Cavill). Three other members join the alliance — Arthur Curry/Aquaman (Jason Momoa), Barry Allen/The Flash (Ezra Miller), and Victor Stone/Cyborg (Ray Fisher). Bruce's fears soon become reality, as the New God Steppenwolf arrives on Earth in search for long lost artifacts of destruction, himself the herald of a much darker threat.

The movie is not a conventional Director's Cut in the sense of including a few Deleted Scenes in the home video. As suggested by the title, Zack Snyder's Justice League is a ground-up rebuilding of the original movie Snyder was trying to make. As such, the many changes that occurred for the theatrical release — between extensive reshoots filmed by Joss Whedon, significant amounts of editing removing numerous subplots and backstories, and other results of Executive Meddling from the studio — are functionally gone; the sheer volume of changes effectively rendering the theatrical version as a completely separate film. Without the constraints of a traditional theatrical release, the movie expands the story and numerous subplots to clock in at a length of 243 minutes. note Snyder confirmed that his original director's cut of the film clocked in at 214 minutes, so the finished movie is about an extra half-hour longer, and about double the length of the theatrical version. The new footage comes from both additional photography and content from the original assembly cut of the film, which Snyder has said was nearly five hours in length. To account for that length the film is divided into six "chapters" and an epilogue, so that viewers may approach it as a Mini Series if they so choose (an Intermission was added for the film's few theatrical presentations).

The content of the film is based on the abundance of footage from principal photography that was left on the cutting room floor, reshot or remade for the theatrical version back in 2017, alongside a handful of new scenes with additional photography filmed in 2020. The bulk of the work, though, lay with restarting and finishing the post-production cycle including ADR with the original cast, remade visual effects, revamped color grading, an adjusted aspect ratio, and a score by original composer Junkie XL (who was replaced by Danny Elfman for the theatrical version) based on the musical template set by himself and Hans Zimmer in Man of Steel and Batman v Superman.

A black and white version of the movie (referred to as the Justice is Gray edition) was released on HBO Max on March 25, 2021. A limited IMAX Roadshow Theatrical Release happened in selected US cities for charity purposes, with the money going to the American Foundation for Suicide Prevention that Snyder supports since his daughter took her own life in 2017.

Snyder has expressed interest in continuing the story in some way afterward; the film was initially conceived as the third chapter in a five-chapter Myth Arc. However, he made no promises, as he's noted that he's grateful that he got the opportunity to finish his movie in the first place. He also mentioned that whether or not he can do more with DC Comics intellectual properties isn't solely up to him — rather, it's up to those with the rights to adapt the DC Comics IP, Warner Bros., who are so far not interested in adapting his stories for the other two movies in his intended arc, the intended spin-offs tied to those movies, or partake in a similar effort to restore David Ayer's original version of Suicide Squad (another notorious victim of Executive Meddling with a reworked story and much never-seen-before footage that was scrapped from its theatrical version). You can read up details on what the sequel's story would have been here.