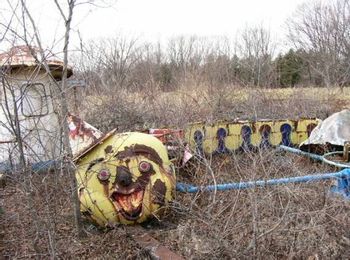 There's just something about the image of a playground that's been abandoned and neglected: chipped paint, rusted or partially decayed metal frames, overgrown sandbox, empty swings swaying ominously in the breeze, the conspicuous absence of the normal sounds of children playing and laughing. Everything seems empty and broken, in contrast to the usual cheerful feeling that a place where children gather is supposed to invoke. The scene may be creepy, or just forlorn.

Sometimes this is used to illustrate the nostalgic longing for a disappeared childhood and the pain of growing up, or the loss of innocence. Other times the Abandoned Playground is home to a Creepy Child humming an Ironic Nursery Tune, or haunted by ghost children, either stringy-haired or cute. If the playground shows up in an After the End setting, or in an area that has faced great destruction, an abandoned playground is shorthand to show that adults weren't the only victims of the terrible tragedy that has befallen the place.

This could also include playgrounds that aren't actually abandoned, just empty. Visiting a place like this after hours when all the children have gone home can be equally strange and unsettling.

Or it may be a good place for our protagonists to sit and contemplate their problems. The image provides a well of symbolism for writers to dip into, which is probably why these places appear so much in fiction.

Compare Abandoned Camp Ruins, as both areas are formerly where kids like going to have fun, and Vengeful Abandoned Toy, when a toy becomes evil after losing its owner.