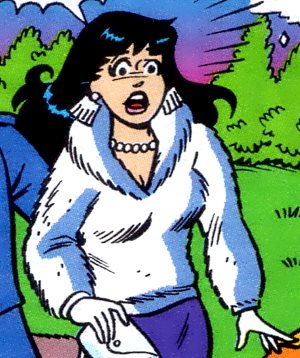 Fur coats are available in a C-cup?
"Following that unseen sauna, we get to see the women with nipples poking through their towels, which apparently operate like shrink wrap, and conform to their bodies perfectly."
— Linkara, Atop the Fourth Wall on 22 Brides #1
Advertisement:

In comics, and some other drawn and animated media, clothing is often drawn fitting around the body far better than it reasonably should in Real Life.

All clothing will fit tightly around an animated woman's 15 inch waist, even if it's dropped or empire-line. Men too, will have an apparent narrow waist even in jackets that wouldn't show that in real life. Of course, the most common form of this is spandex outfits, which nowadays wrap around every curve and muscle (especially prominent since the late 1980s) but as the picture shows, any piece of clothing can wrap around better than it should if the artist so chose, whether it be an overcoat or the bodice of a Pimped-Out Dress.

The reason this is done is likely a combination of Rule of Cool, Rule of Sexy and Reality Is Unrealistic, with a heaping bushel of Fanservice for good measure. If the character has a good figure, the artist likely wants to show it off, to advertise the beauty or natural athleticism.

Another reason, particularly where superhero comics are concerned, is that artists are trained to draw (naked) human figures. It is faster and easier to add colors that imply spandex clothing than to actually draw the folds and wrinkles that come with wearing realistic clothing. In other words, most of the time (and this goes for male characters as well as female), what you're seeing are nudes with strategic coloring.

Some Live Action Adaptations try to sculpt the outfits to simulate the look in the comics.

Can be inverted with Unmoving Plaid in order to "flatten out" logically form fitting clothes and reduce the fanservice of things like a Panty Shot.

A Sub-Trope of Impossibly Cool Clothes.

A Super-Trope to Chainmail Bikini and Latex Spacesuit.

Compare Most Common Superpower, Sensual Spandex (which often shows some skin as well as conforming to the skin it covers), Sweater Girl (although the sweater is designed to be form-fitting), Painted-On Pants, Superheroes Wear Tights.

Not to be confused with Clingy Costume, Body Paint.