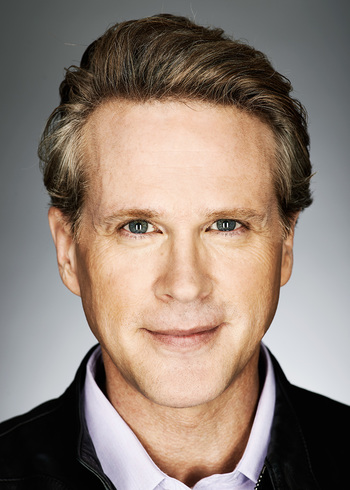 "I think as an actor you're lucky to have any film take on a life of its own long after it's left the theater."
Advertisement:

Ivan Simon Cary Elwes (born 26 October 1962) is an English actor and writer. He was born in Westminster, London, the youngest of three sons, and attended the London Academy of Music and Dramatic Art. In 1981, he moved to the United States to study acting at Sarah Lawrence College in Bronxville, New York.

Elwes's first film role was as Jame Harcourt in Another Country, but he truly entered the public eye in Rob Reiner's cult classic, The Princess Bride. Since then, Elwes has worked steadily in film, television, and voice-acting roles, balancing comedic projects with dramatic ones in nearly equal measure.

In October 2014, Simon and Schuster published his memoir As You Wish: Inconceivable Tales from the Making of The Princess Bride, which he co-wrote with Joe Layden.