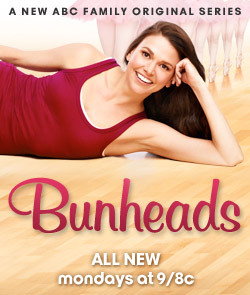 "There's no crying in baseball! Or ballet!"
Advertisement:

Bunheads is a series that aired on ABC Family, created by Amy Sherman-Palladino of Gilmore Girls fame.

Michelle Simms is a classically trained dancer that wound up as a Vegas showgirl. One night after she is rejected from an audition for a touring production of Chicago without getting a chance to perform, she accepts the proposal of Hubbell Flowers, a traveling shoe salesman who lives in a house with a fantastic view of the Pacific in a town called Paradise. Hubbell fails to tell her that he lives with his mother, Fanny, who runs a ballet school attached to the house.

Considered a Spiritual Successor to Gilmore Girls. Was cancelled in 2013 after only one season.