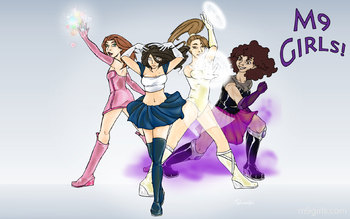 Superheroines with a sense of fashion...
M9 Girls!

is a webcomic by Rulopótamo, first drawn by Kanela and later by Shadow (formerly known as Séreméla).
Advertisement:

The M9 Girls are Any, Pato, Claudia, and Karla. They are a team of college researchers who gain the ability to tap into the primordial power of the universe and become endowed with superpowers as a result. The current story arc is the origin story, with the girls discovering the implications of their transformation. Although the girls dress up in attires closer to Magical Girl looks, their story is more of a Super Hero one with Mad Science overtones. The comic has been updating since 2011, and was completed in April of 2019.