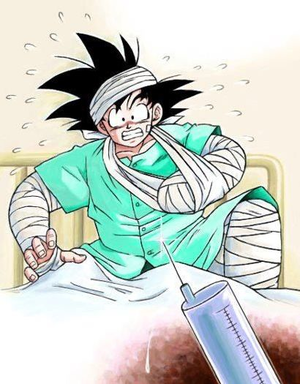 You're tough. Tougher than tough. You're Made of Iron! What's more, nothing, and we mean nothing can surprise you or unsettle your Stoic countenance. Except for injections, that is. Those make you scream like a little girl and hide behind your love interest. Trypanophobia, the fear of injections and hypodermic needles, is a recognized disorder in the American Psychiatric Association's Diagnostic and Statistical Manual of Mental Disorders (the psychiatrist's bible) which is estimated to afflict up to 10% of adults.

For some reason, the Fatal Flaw of many a hero is fear of hypodermic needles and antiseptics. Not knives, not absurdly large guns, not even snakes! There's just something deliciously ironic about a Big Damn Hero who routinely gets cut up with huge knives, beat to within an inch of their life and without giving up, becoming squirmy and panicky when their Love Interest comes over with a simple syringe and sanitary cotton to clean their wounds. It seems most any non-battle pain can cripple this person. It's certainly a "clever" way to make a Badass Longcoat less OP and is a very humanizing flaw to have. In extreme cases, expect fainting — even if the needle isn't going into him!

Even the Fearless Fool can fear needles.

This can help make the pain of the fight more recognizable. Few viewers will have been riddled with bullets or been hit by a speeding motorcycle, but most will have had antiseptic rubbed on a wound or a bandage removed, and know how much that hurt.

This is a common enough fear among many people and a particularly fun example of Truth in Television. It may be related to the fact that while combat injuries and the resulting pain are usually suppressed by adrenaline, the pain that comes along with tearing off bandages, or putting peroxide into wounds is not. There is also how things like papercuts or anything involving feet injury can be more painful than an injection, but regularly won't make people flinch due to being unexpected, unlike being injected where people expect it.

Mind you, this isn't always played for comedy. Someone who's had bad experiences with needles, such as someone who suffered horribly at the hands of people Playing with Syringes, is likely to have very understandable reasons for wigging out when one is in their presence, especially in a medical or scientific setting. Naturally, if you're a balloon, needles can be downright fatal!

A subset of Fatal Flaw, and often portrayed as an Absurd Phobia or Ironic Fear. See also Afraid of Doctors and Foul Medicine. Can be the driving force of an Injection Plot, especially if the Giant Medical Syringe is involved. Science Fiction often deals with this fear by switching to Futuristic Jet Injectors.