Literature / The Saga of Tuck 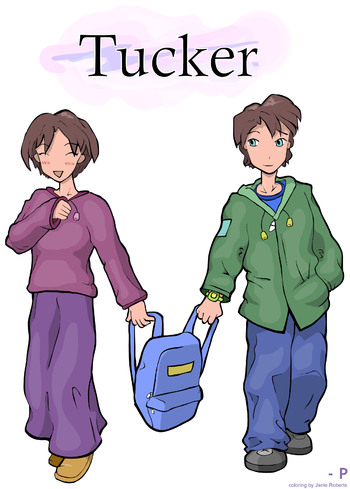 Take your average group of teenagers in any high school drama - you've got the cliques, the bratty cheerleaders, the testosterone-crazed jocks, the outsiders who are too normal to be cool, the geeks who are too far out for even the normals, the freshmen who want to fit in, the recently-transferred students who want to do the same... and then you have Tuck and his friends. He's the high-school nerd who's particularly skilled in various manners of weaponry and martial arts through necessity, whose family is equally so, who alternates between roleplaying, computers, and going out on week-long hiking trips with friends, not to mention skilled enough to take care of a number of computer jobs, but still runs up against the aforementioned cliques and jocks on a far too regular basis.

Oh, and lest it seem still rather ordinary, it turns out that his girlfriend has a few quirks, and when she decides to Mind Screw the entire campus with him on Halloween, he seems far too good at being female... and that's just the start.

The Saga of Tuck

is a long-running, generally-acclaimed work of fiction by Ellen Hayes, exploring just how a teen would react if suddenly his life, and gender, were turned upside down in so many ways. Published periodically online since 1997 (which is when the storyline is set; a little over a year of story time has elapsed in a dozen years), it's an excellent look at how normal - and yet how very strange - a teenager's life can become. The 'Valentine's Day' episodes are a continuation of the main story after a two-and-a-half-month (as of #142) Time Skip, while 'Tuck Season' is an Alternate Continuity story set in the 'Seasons of Change' shared universe.

This serial novel provides examples of the following tropes: