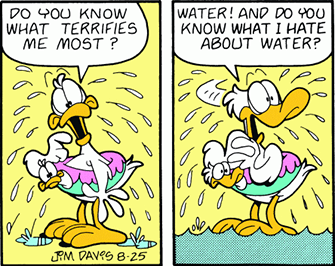 "A pegasus who's afraid of heights. Huh. What's up with that?"
— Spike, My Little Pony: Friendship Is Magic, "Party of One"

Often, they get an episode or subplot dedicated to resolving this fear. Almost always Played for Laughs, although there will often be a dramatic moment where they are forced to confront said fear.

These can often be considered Absurd Phobias. May be part of a "What Do They Fear?" Episode. Compare Why Did It Have to Be Snakes?, in which the thing that the character fears pops up at an unexpected and inconvenient moment, rather than being something that constantly confronts them. If a character is afraid of something they are, they're a Boomerang Bigot. If they become the thing that they fear, it's a Karmic Transformation.