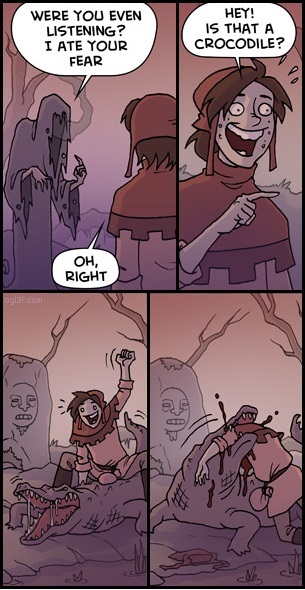 "Courage is the complement of fear. A man who is fearless cannot be courageous. (He is also a fool.)"
— Robert A. Heinlein
Advertisement:

Feeling scared in a dangerous situation is the necessary condition for courage. The Fearless Fool is never afraid, but that's not because he's braver than everyone else; he's not afraid because he doesn't know he's in danger, meaning his survival (if he does survive) will come down to blind luck.

The opposite of this trope is the Dirty Coward, who is often scared but never brave. Also compare Miles Gloriosus, who is happy to talk about his bravery when he'll never be called on it, and the Cowardly Lion, who never thinks his actions are brave because he has to fight his fear the entire time.

Frequently the Aesop of Youth Is Wasted on the Dumb. Often a case of Attack! Attack! Attack!. Compare Nobody Calls Me "Chicken"!. Also compare Perilous Old Fool, who is frequently this. Contrast Fearless Undead, where reanimated dead beings — for obvious reasons — no longer have a survival instinct.

Naturally, any hero who blurs the line between 'brave' and 'stupid' is going to hear about it in the After-Action Patch-Up, even if he is ultimately praised for his deeds.

But maybe she shouldn't be

But maybe she shouldn't be