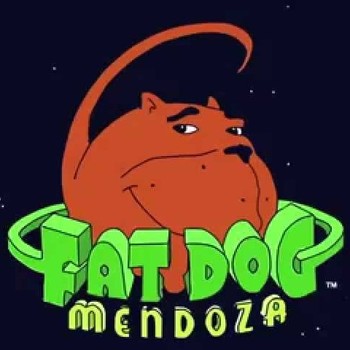 Fat Dog Mendoza is an... interesting show that aired on Cartoon Network in the UK based on the comic of the same title published by Dark Horse Comics

. It is about a boy and his dog doing random wacky things in their home town, Neighborhood X. It also has an old granny with an afro, an onion-headed boy, a two-headed teacher, a monkey, and a random super-villain like dude. Yes, really.

Sunbow Entertainment worked on this cartoon, and it is the only cartoon they have worked on that never aired in the United States.

Not to be confused with As Incríveis Aventuras de Dog Mendonça e Pizzaboy!.