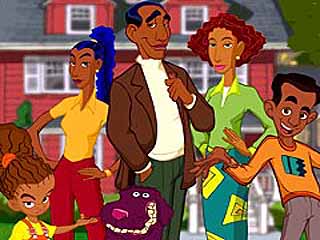 This Animated Series on Nick @ Nite, based on the popular book by Bill Cosby, concerns high school teacher Arthur Bindlebeep; his wife, Norma; their three children, Angie, Roy and Katherine, and the family dog, Guinness. The stories tend to be gentler than those in other animated Sit Coms, and there's always a lesson to be learned at the end. The show ran for two seasons from 2004 to 2005.

The voice cast includes Blair Underwood as Arthur Bindlebeep and Sabrina LeBeauf as Norma. The show's official site is here.