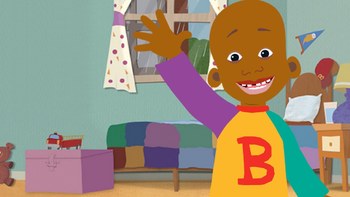 Little Bill is an animated children's series based on a series of books by Bill Cosby and Varnette P. Honeywood. It stars William Glover Jr., or "Little Bill" for short, an inquisitive and imaginative five-year-old living in Philadelphia. He lives with his father "Big Bill", mother Brenda, siblings Bobby and April, and great-grandmother "Alice the Great." He also has a pet hamster named Elephant.
Advertisement:

To replicate the books' paper cut-out illustrations, the show was animated in Flash with a construction paper style. Each episode is underscored by a calm, jazz-inspired soundtrack. Episodes typically involve Little Bill overcoming a problem at home or at school, and they end with him breaking the fourth wall by summarizing his day to the audience before going to bed.

The show originally aired on Nickelodeon from 1999 to 2004. Reruns were seen on Noggin and Nick Jr. until 2014, when the show was pulled from the air due to the accusations against Bill Cosby. Since then, the show has suffered Creator Backlash from Nickelodeon, which has tried to bury it, going so far as to retroactively remove the show from past schedules

that originally included it.