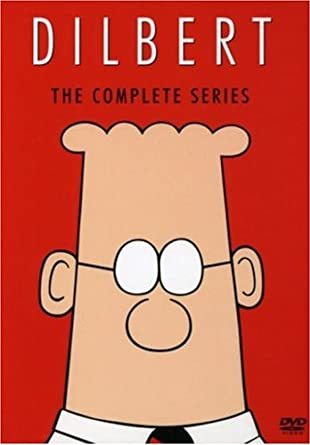 Animated Black Comedy Work Com adaptation of Scott Adams' cult comic that ran for two seasons on UPN, produced by Columbia-TriStar Television, starring the voice of Daniel Stern as Dilbert, an engineer working for a soulless and bureaucratic corporation, underneath an incredibly thick-witted, Pointy-Haired Boss (Larry Miller). The opposite of him in almost every way is his dog, Dogbert (Chris Elliott), a morally gray genius who constantly exploits Dilbert, Dilbert's company and everyone else with consummate ease.

was a revision of Danny Elfman's opening theme from Forbidden Zone.

Aside from the tropes carried over from the comic, this show provides examples of: