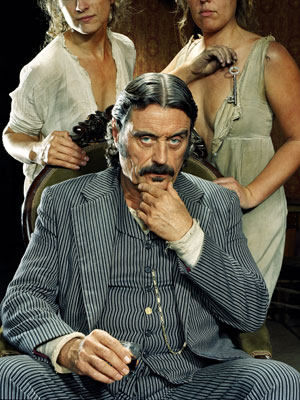 Whatever you do, don't piss this man off...
"A Hell of a place to make your fortune."
— HBO's summation of the show's setting.
Advertisement:

Deadwood is a historical fiction series created by David Milch and produced by HBO and Paramount Television, with the former owning US rights through Warner Bros. and the latter owning international rights. The series takes place during the 1870s gold rush of the South Dakota Black Hills, focusing on the boom town of Deadwood. It deals with many historical events and characters, but also takes considerable Artistic License. The show featured a large ensemble cast, all trying to survive on the cut-throat frontier.

Some are interested in establishing a new life, others trying to escape their past, but all have been lured by the promise of new wealth. Soon, larger powers descend on the town, including the American government and a mining concern run by George Hearst. Conflict arises between the original settlers and the newcomers over the fate of the gold (and hence, the town), the dynamic tension created by the small-time players trying to resist the encroaching forces of civilization drives much of the plot.

The show was critically acclaimed and moderately popular. Beyond its viewing audience, it also gained notoriety for its unprecedented use of profane language, most of it anachronistic. This was a purposeful choice by the writers, who wanted the show to be suitably Darker and Edgier.