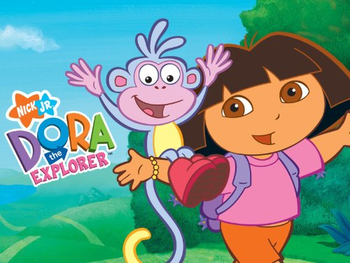 ¡Vámonos, amigos!
Dora the Explorer is a long-running animated television series produced and aired by Nickelodeon, as part of Nick Jr.. Produced in the style of a mid-1990s CD-ROM game made by Humongous Entertainment, the show follows Dora, a cute 7-year-old explorer girl, and her monkey friend, Boots, as they teach young viewers, in both English and Spanish, how to observe situations and solve problems.
Advertisement:

Lasting for a nearly fifteen-year run (from 2000 to 2015), Dora overtook Blue's Clues's throne as Nick Jr.'s longest-running series, and is one of Nickelodeon's most heavily merchandised characters after SpongeBob SquarePants, before being overtaken by PAW Patrol. In March 2009, Mattel raised a minor furor with its new "Tween Dora" doll, mentioned below.

A feature film set after the show's events was released on August 9, 2019, directed by James Bobin and starring Isabela Merced as a teenage Dora. The final six unaired episodes were released in July-August 2019 to commemorate the release of the movie.

Spinoff series include Go, Diego, Go!, which centers around Dora's titular cousin, and Dora and Friends: Into the City!, a Slice of Life sequel series. A live-action reboot

and a CG-animated series

are currently in development for Paramount+.

Thanks for helping! Gracias!

Now we can jump in the book

In some episodes, like "Dora Saves the Prince", they had to jump into a book to start an adventure.

Standing up to Owl

Now we can jump in the book

In some episodes, like "Dora Saves the Prince", they had to jump into a book to start an adventure.

Standing up to Owl