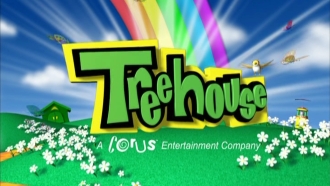 Treehouse TV (or simply "Treehouse") is a Canadian network targeted at preschool-age audiences and named after a former YTV program block. If YTV is the Canadian counterpart to Nickelodeon, then Treehouse is one for Nick Jr. and has naturally also aired shows from Playhouse Disney and PBS Kids on top of original programming produced for the network. Since Treehouse is owned by Corus Entertainment, and Corus also owns Nelvana, most of the network's original programming is usually produced by the studio.

If you live in the United States, you may recognize Treehouse from their labeled DVD releases of certain programs, their Vanity Plate at the end of one of their shows, or from watching Qubo (which airs vault programming from Corus among other companies). In addition to television, Treehouse has also released branded personal care products (shampoo, lotion, etc.), usually featuring Nelvana characters. Naturally, there are no exports for those in the U.S, unless you choose to do it yourself. There are online Canadian stores that will sell them to you, though don't expect to get off cheaply. According to The Other Wiki, they've recently branched into Jamaica and the Bahamas, but so far have not indicated any interests in branching out further.

Notable shows that have aired on or were produced for the network include: