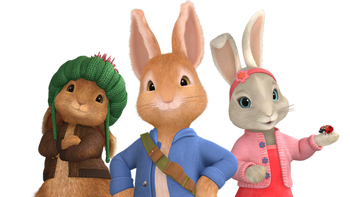 An All-CGI Cartoon running on Nickelodeon in America and CBeebies in the UK, Peter Rabbit revolves around the familiar figure that starred in the first of Beatrix Potter's children's books. Peter is joined on his adventures by his cousin Benjamin Bunny and Lily Bobtail, a new character created for the series. The characters are also joined by a hodge-podge of characters from other Beatrix Potter books, such as Jemima Puddle-duck and Mittens the kitten.