Western Animation / Babar and the Adventures of Badou 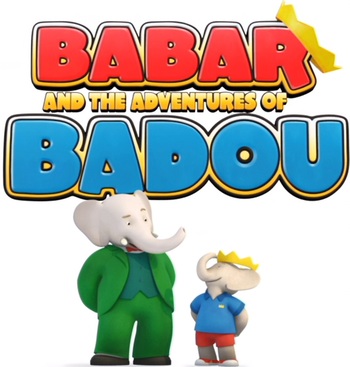 Babar and the Adventures of Badou is a Canadian-French-Luxembourgish computer-animated children's series produced by Nelvana. It aired new episodes from 2010 to 2015 on YTV and Treehouse TV in Canada and Disney Junior and Qubo in the United States, running for a total of 65 episodes over 3 seasons.

Babar and the Adventures of Badou is a Sequel Series taking place many years after the original Babar Animated Adaptation produced by Nelvana way back in 1989. Serving partly as a reintroduction of the king of the elephants to a new generation of children, the show focuses on Badou, the 8-year-old grandson of King Babar and son of Babar’s now-adult son Pom (who is now Celesteville’s chief architect). Alongside a host of completely new characters and a few familiar faces from the original show, Badou has fun with his circle of friends (including Zephir’s daughter Chiku, Munroe the porcupine, Zawadi the zebra, and Jake the fox), solves problems around Celesteville, and explores the surrounding jungles and savannahs. And while he’s at it, the young prince learns many important lessons while also dealing with the occasional antagonist.

Unlike in the original series, Celesteville is not populated solely by elephants and now includes a wide variety of African wildlife among its citizens. Additionally, several voice actors from the 80s cartoon reprise their characters here, including Gordon Pinsent (the voice of Babar himself), Dawn Greenhalgh (Celeste), Chris Wiggins (Cornelius, in his final appearance), and Jeff Pustil (Zephir). You can find episodes on Youtube through the the show's official channel

Crocodylus gets embarrassed when his stomach growls.

Crocodylus gets embarrassed when his stomach growls.