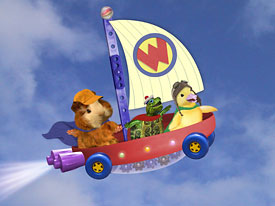 What's gonna work?note Teamwork! (Characters from left to right: Linny, Tuck, and Ming-Ming.)
Turtle Tuck: A baby animal! She's in trouble!
Ming-Ming Duckling: This is serious!!
Linny Guinea Pig: We have to help her!
Advertisement:

And pretty much every parent who watched television with their child in the mid-to-late 2000s could probably recite the rest by heart.

Created by Josh Selig, who had previously created Noggin's Oobi, Wonder Pets! is a series about three cute little baby animals who go on adventures to save other cute little animals. The animation is created with cut-out photographs and all the important dialogue is delivered operatically.

The series started as a set of two short films called "Linny the Guinea Pig." Selig made these in between production cycles of Oobi and pitched them to Nickelodeon. Selig called Nickelodeon "a great partner," saying "They're really the company that first believed in us when we pitched Oobi, and then they believed in us again on Wonder Pets!."

"Save The Puppy!" is a pet variant of this; a puppy is described as ready to go outside, "like a big dog".

"Save The Puppy!" is a pet variant of this; a puppy is described as ready to go outside, "like a big dog".