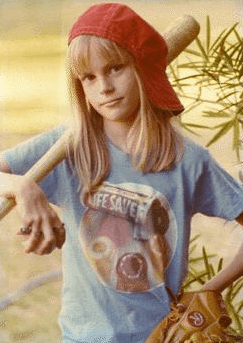 So you have a female character who lacks the characteristics and mannerisms of a normal female and only have the characteristics of a male. They can fight, they can play sports, they drink a lot, they play video games, and they're well-liked by the guys (at least some of them). Yes, that's a tomboy. But there's something missing. What could it be?

Well, all she needs is a trademark baseball cap.

This is the trope where a tomboy can be identified by wearing a baseball cap. Most of them wear caps if they commonly love to play baseball. They may wear it when they're in the army. Others wear it just for the sake of setting themselves apart from the Girly Girls she's expected to hang out with. As far as this trope is concerned, a baseball cap is like the cherry on top for the tomboy, and when tomboys wear caps, it's usually a cool sight to see.

A subtrope of Signature Headgear. Also see Tertiary Sexual Characteristics; baseball caps are a masculine one.