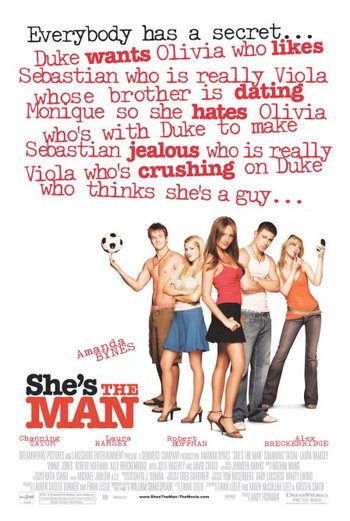 She's the Man is a 2006 teenaged Romantic Comedy starring Amanda Bynes (The Amanda Show) and Channing Tatum which is loosely based on Shakespeare's Twelfth Night.

Tomboy Viola Hastings (Bynes) is intensely into soccer, so much that when her school, Cornwall, cancels the girl's soccer team and refuses to let her play on the boy's soccer team, she hatches a plan to show them and her Jerkass ex-boyfriend that a girl can play just as well as a boy. Viola has a twin brother, Sebastian (James Kirk — no, not that one), who has decided to run off to London for two weeks to play with his rock band just before he is due to start at Cornwall's rival school, Illyria. The twins decide to help each other and solve the other's problem at the same time.

With the help of her sharp-dressing hairdresser pal Paul, Viola becomes Sebastian!Viola, enters Illyria, and voilà!. It's not a perfect disguise, but no one at the new school has met Sebastian (so they don't know the difference), and their parents are clueless because they're divorced and Illyria is a boarding school. Viola and Sebastian simply tell each that they are staying with the other, Her roommate is Duke (Tatum), the eventual Love Interest, but Sebastian!Viola has problems at first because of Sebastian's permanent record (he's a troublemaker) and because Viola is still a girl under her disguise. With a bit of help from her hairdresser friend, Sebastian!Viola is accepted into Duke's group of friends but is still second string for the boys' soccer team.

Enter Olivia (Laura Ramsey) who becomes Sebastian!Viola's lab partner, though Duke has a massive crush on her. Duke, who has issues talking to girls, tells Sebastian!Viola this and asks for her his her help. And so begins the Love Dodecahedron as described in the poster.

Compare Just One of the Guys, which was Twelfth Night in an '80s high school.