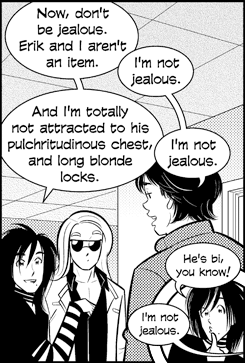 An Only Sane Man demonstrates the correct counter-move.
Hermione: I've just escaped — I mean, I've just left Cormac under the mistletoe.
Harry: Serves you right for coming with him!
Hermione: I thought he'd annoy Ron most.
— Harry Potter and the Half-Blood Prince
Advertisement:

A specific type of Zany Scheme: Two characters, Alice and Bob, are an Official Couple... or they would be, if Bob wasn't so mired in the river of denial that he insists that the water flowing all around him is solid ground. Alice, who is not in denial and very aware of Bob's feelings, gets fed up with his refusal to spit them out and takes matters into her own hands. Confronting him directly with the evidence might cause him to run for the hills, so Alice decides to invoke Green-Eyed Epiphany: She gets into a faked or temporary relationship with Convenient Charlie, to make Bob insanely jealous enough to come clean first.

Subtrope to Fake Relationship. Compare with The Schlub Pub Seduction Deduction, Intentional Heartbreaker, Be a Whore to Get Your Man, and Revenge Romance.