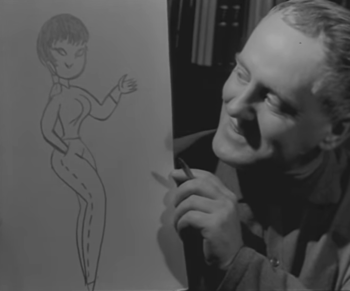 Jucika and her creator, Pál Pusztai
Jucikanote pronounced "YU-tzi-ka", meaning "Lil' Judy" or "Lil' Julie" was a humorous Hungarian comic strip created by cartoonist Pál Pusztai which ran from 1957 up until the author's death in 1970. Originally circulated in the social magazine Érdekes Újság, it moved to the country's sole officially sanctioned satirical newspaper Ludas Matyinote named after, but not to be confused with, the Folk Hero protagonist of the narrative poem Lúdas Matyi in 1959, where it became an iconic part of Socialist era pop culture.
Advertisement:

The mostly three-panel strips starred the titular character, a well endowed and free spirited young woman with short black hair, following her peculiar ways of going about her daily life and managing her seemingly ever-changing occupations, relying on visual gags over dialogue. As part of Ludas Matyi's boundary-pushing efforts during Hungary's mid-20th century cultural liberation and Pusztai's own fondness for playfully erotic humor, the comics contain a lot of fanservice — Jucika would often appear nude or in revealing clothing, with many of the strips focusing on how she deals with the attention she willingly or unwillingly draws to herself.
The series made fun of a wide range of other everyday topics during its 500+ strip run, showing off all sides of the heroine's character, who could be stubborn and infantile, lovely and generous or plain hapless depending on the story. With little to no continuity other than occasional reminders of her eventual marriage, Jucika could take up any job, show up almost anywhere, or be on the giving or receiving end of slapstick as she used her wits, physique or general allure to achieve her goals, at times with unforeseen results.

With Pusztai's passing, no further Jucika strips were published apart from one half-finished piece, and people close to the artist have alleged that all of the original comics were destroyed by Pusztai's widow who had hated Jucika. Poet Károly Borlóy adapted some of the strips into short, comedic poems for a planned 1970 book that also got cancelled due to the artist's death, though it finally received a rather overlooked posthumous release in 2009, under the title Fondorlatos Jucika (Crafty Jucika).

Over time, the comic has mostly been forgotten as more explicit content became the norm, especially once other satirical adult papers launched in Ludas Matyi's place. The character, though, has left her mark as a vintage symbol of this uneasy time in her country's history. Nine of the strips also made their way to the East German paper Freie Welt, and 240 were sold to Canada (under the name Judy). Various European publications also put out Jucika strips, China got a taste of her in 1989, and 2003 saw the release of a Jucika-centric Chinese compilation.

An official collection of the '57-58 strips has been released in late 2022 by Hungarian publisher kilencedik.hu.