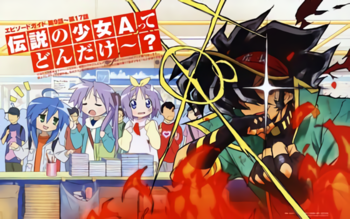 No, this wasn't done with Photoshop. It's just that this guy thinks he lives in a Hot-Blooded Shonen anime.
Advertisement:

A character that looks strange in the context of their cartoon world. Often a result of Art Evolution, with earlier designs becoming The Artifact to a newer, more refined sensibility. It could be that a major character was designed independently and integrated without any changes. This could also be an intentional stylistic choice, indicating a descrepency between the odd one out and the rest of their world.

Crossovers often result in this, with an attempt at fidelity to both art styles rather than going for Off-Model. It's especially noticeable when the characters are from different franchises, showcasing distinctive character designs from their respective source material. A Gonk often utilizes this, deviating from the style specifically for the purpose of looking ugly. Same could be applied to an Eldritch Abomination to emphasize how alien it is.

Compare Art Shift (when the art itself shifts in style temporarily), Masculine Lines, Feminine Curves (women tend to be drawn more realistically than men in many illustrated works) and Flashy Protagonists, Bland Extras (when the major characters look non-standard compared to the background characters). Cartoonish Companions, No Cartoon Fish, and Realistic Species, Cartoony Species are subtropes. Sometimes Evil Is Angular can result in this if there's a heavily skewed hero/villain character ratio.