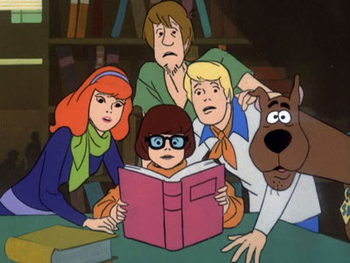 Except for Scooby.
Advertisement:

You may notice that some cartoon characters don't have to have whites to their eyes. Well, they're certainly not white.

Skintone Sclerae are just that: As opposed to the irises being surrounded by white space, a character's skin will apparently go on into the eyeball.

Compare Black Bead Eyes — you could alternately describe this trope as Black Bead Eyes but with a small line to indicate the upper eyelid, sometimes eyebrows, and no more detail than that.