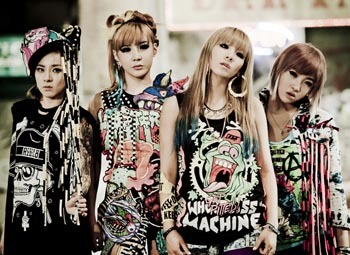 2NE1 (usually pronounced "twenty-one" or "to anyone" , Korean: 투애니원) is a Korean Pop Music Girl Group from South Korea under YG Entertainment that debuted in 2009 and disbanded in 2016 following a two year hiatus. Several members featured in their labelmates' songs predebut, and Dara was a former actress and singer in the Philippines, where she grew up. Following their debut they obtained instant success, due in part to the fact that their style and lyrics gave the quartet an edge rare in the girl group scene at the time. They've impressed Black Eyed Peas' will.i.am, who started working them in 2010 and has helped them record an English album for their debut in the States; however it got stuck in Development Hell and, seeing as how the group has disbanded, has probably been shelved for good.

Additionally, Bom and CL are also successful solo artists; Bom debuted in 2009, while CL debuted in 2013 and plans to debut in America as a soloist with Scooter Braun's entertainment company.

The group went on hiatus in mid-2014 due to Bom's drug scandal, where she was caught allegedly smuggling amphetamines into Korea years before

. There were several statements varying from weight loss pills to medicine for her depression stemming from the death of a good childhood friend

. Regardless of the true story and despite YG's attempts to bury the scandal, the strong backlash led to Bom being pulled out of Korean activities, leaving the group to promote without her (if at all) in Korea afterward. Concerns that they would disband arose, with Minzy posting the quote "Your career may change, but you will not" while briefly removing the 2NE1 mention from her Instagram profile and CL focusing on preparations for her American debut.

In April 2015, YG sat down for an interview wherein he said that the group's contracts expire in 2016, and followed up with "CL’s almost done with the album. Whether she will [succeed] or not is something that can only be known after she [debuts]. From my standpoint, we are proactively supporting CL’s solo activities. I am planning the release of 2NE1’s new album for after CL finishes her solo activities. 2NE1 will surely show you good work until the expiration of their contracts." Fans took this to mean that YG was intending to decide on whether or not to disband the group based on the reception to CL's solo (ie. if she succeeds, he will disband the group to focus on her, and if she fails, she'll return to the group and they'll record a new album), and were utterly furious. CL herself expressed her displeasure by uploading a certain photo to Instagram

In October of 2015, the group were announced to be having a comeback, but recent speculation and reports from industry insiders

point to this comeback merely being another CL solo track, and YG allegedly saying that the focus will be on CL from here on out. Fans

In April of 2016, it was eventually confirmed that Minzy had left the group and they would be continuing on as a trio

, preparing for a summer 2016 comeback. Minzy has since signed with Baek Ji Young's agency Music Works.

A month later YG was quoted as saying

that the group's future was "unclear": "Whether they will continue as a trio or get a new member, we are thinking and nothing is set in stone", which directly contradicts his earlier statement.

In November of 2016, YG released a statement announcing the group's official disbandment, saying that while CL and Dara had re-signed with the company, Bom had not

: "2NE1’s exclusive contract expired in May 2016, and with Minzy leaving 2NE1, we have come to the decision to officially disband after extensive discussion with the remaining members. As 2NE1 was YG’s official girl group for seven years, we cannot begin to express how we feel, but we determined that it was too difficult to continue. Rather than waiting an unknown amount of time for 2NE1’s next promotions, we have decided to focus on the members’ solo activities. We sincerely thank all the fans both in Korea and abroad that have loved the group and their music for all this time. We would like to officially announce that after last May, we resigned with CL and Sandara Park. However, unfortunately, there is no new contract with Park Bom."

As of 2014, they have released 2 mini albums in Korean, 1 mini album in Japanese, 2 full albums in Korean and 2 full albums in Japanese, becoming incredibly popular at home. They are known and admired by many for their edgy concepts, powerful songs, impressive stage charisma and quite dorky and likeable personalities. As of 2020, all members are now working on solo projects, with CL and Minzy now independent artists owning their own companies, Bom Park is with D-Nation Entertainment (and made an appearance on the reality show "Queendom"), and Dara is the permanent co-host of "Video Star" and working as an actress.

Members at time of disbandment: