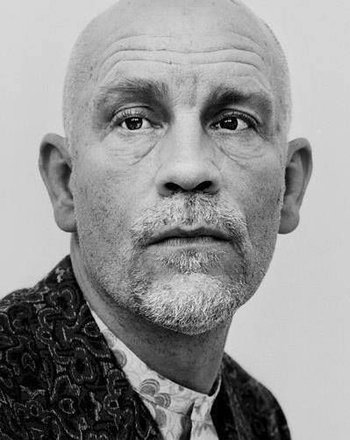 "I have driven school buses, sold egg rolls and painted houses, and I have often wondered what my life would have been like if I hadn't gone into acting. Mind you, it's a great life, going around pretending you're other people and getting paid ridiculous sums of money for it."
Advertisement:

He is known for playing creepy psychopaths extremely well, and has made his fame in films such as The Killing Fields, Empire of the Sun, Dangerous Liaisons, Con Air, In the Line of Fire, and Being John Malkovich.

Malkovich is a master of the Creepy Monotone, and can either be quietly understated or be a Large Ham of astronomical proportions. However, as with many great actors, he has appeared in some less-than-luminous films, including Eragon and Jonah Hex. He also appears in a cameo in Adaptation. during the filming of Being John Malkovich.

He has now branched into the small screen, having played the infamous pirate Blackbeard in NBC's Crossbones, the recurring role of Grigor Andolov in Showtime's Billions, Hercule Poirot in the BBC's The ABC Murders, a pope opposite Jude Law in HBO's The New Pope, and a hapless NASA scientist in Netflix's Space Force. He is also the owner of a fairly popular restaurant in Lisbon, Portugal. And also appeared in the song SPICY