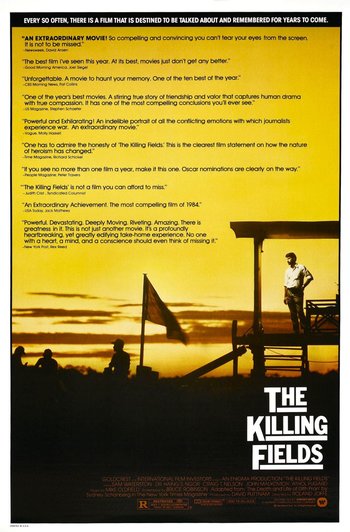 "The wind whispers of fear and hate. The war has killed love. And those that confess to Angkar vanish, and no one dare ask where. Here, only the silent survives."
—Dith Pran
Advertisement:

The Killing Fields is a 1984 British drama film by Roland Joffé (the French director of The Mission), based on US journalist Sydney Schanberg's account of Cambodia's Khmer Rouge regime in his 1980 New York Times Magazine article, "The Death and Life of Dith Pran". The role of Pran is portrayed in the film by Dr. Haing S. Ngor, a Cambodian doctor who actually lived under the Khmer Rouge regime and escaped, and went on to win the Academy Award for Best Supporting Actor.note The only actor of Asian origins ever to do so. It also stars Sam Waterston (who was nominated for Best Actor at the Academy Awards) as Schanberg, along with John Malkovich, Julian Sands, Craig T. Nelson, and Spalding Gray. The soundtrack was composed by Mike Oldfield.

May, 1973: as the Khmer Rouge wages war against the Cambodian government, the American journalist Sydney Schanberg meets Cambodian journalist and interpreter Dith Pran. They become friends while covering the war together, until the Khmer Rouge army finally takes power over Cambodia and enters the capital city of Phnom Penh. There, both men — along with the remaining Westerners from Phnom Penh and thousands of terrified Cambodians — take refuge at the French embassy, until the Khmer Rouge forces all male Cambodians out and the others are evacuated.

Over the following years, Schanberg — now back in America — wins a Pulitzer Prize for his coverage and keeps in contact with Pran's family while trying to discover Pran's whereabouts. Pran, meanwhile, endures the ultimate nightmare of the new government's Killing Fields. Will Schanberg find Pran? Will Pran succeed in reaching out of hell?

Overall, the film is a very moving and powerful portrait of one of the darkest eras of the 20th century. Spalding Gray, who plays the U.S. consul, earned worldwide fame as a raconteur with his relating of his experiences making the film in his one-man stage show Swimming to Cambodia, later captured in Jonathan Demme's 1987 film of that title.

Not to be confused with Texas Killing Fields