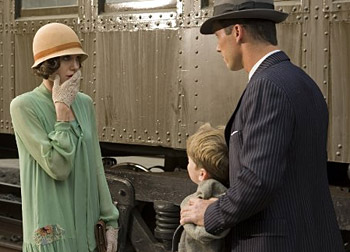 In the late 1920s, the bustling city of Los Angeles is being run by a police force notorious for violence and corruption. It is here that Christine Collins (Jolie) lives with her young son, Walter. When she returns from work one afternoon and finds that her son is missing, the distraught single mother begs the LAPD to help her find him.

After five months of searching, the police report that they have found Walter alive in the company of a drifter. Christine is taken to meet the boy at a train station, where she realizes that the child before her is not her son. When she attempts to make police Captain J.J. Jones (Donovan) aware of this, he insists that she is the one who is mistaken, and simply doesn't recognize her own son after the ordeal he's endured. With even the boy claiming that he is Walter Collins and that Christine is his mother, the confused woman succumbs to Captain Jones' pressure and takes the child home with her in the hopes that she will begin to recognize him.

When she cleans the boy up after arriving home that evening, Christine's suspicions are confirmed: Not only is this boy circumcised when her son was not, but he is also 3 inches shorter than Walter. Her son's teacher and dentist also confirm that this boy is not her son. When she reports this information to Jones, however, he refuses to listen. Unwilling to accept that they have made a politically embarrassing mistake after the Rev. Gustav Briegleb (Malkovich) has released a series of scathing radio broadcasts bringing the LAPD's criminal activities to light, the police inform her in no uncertain terms that the strange boy is Christine's son, and that the case is now closed. As Christine grows increasingly more desperate in her attempts to find someone, anyone, who will help her find her real child, she quickly learns that Jones and the LAPD will do absolutely anything to keep her from telling her side of the story.

Changeling is a hard-hitting drama that explores themes of police corruption and the plight of women in the era of The Great Depression. The events depicted in the film are based on the true story of Christine Collins and the search for her missing child. While the film received mixed reviews from critics, it was nominated for numerous awards, including several for Best Cinematography and Best Actress for Angelina Jolie's performance.