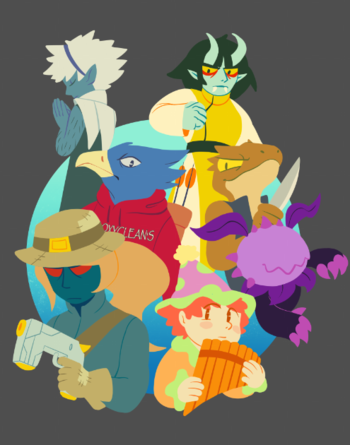 The seven player characters, rendered in beautiful t-shirt quality. note From left to right, top to bottom: Armiarma, Umi, Jazz, Grekk'it, Remmie, Stinkledworck, Gnarbo
"The tailwind didn't work, and— that camel, it's not even running, it's literally flying. You can see icecubes flying through the air."
Advertisement:

Pen and Paper is a fantasy Cloudcuckooland tabletop campaign created and played in the homebrew system of the same name.

The podcast follows the adventures of questing veteran Remmie Booker and six new recruits (Grekk'it Cooper, Jazz Chives, Stinkledwork Mcrubbinfuffer, Gnarbo, Armiarma and Umi) under the employ of the Adventurer's Guild through the continent of Dren Hep. Throughout their travels they fight through snowy mountains, barren deserts, and even oceansides infested with deadly crabs. That's not all though- the world is populated with the mind-numbingly melancholy as much as it is with the mind-screwingly silly.

Pen and Paper contains examples of: