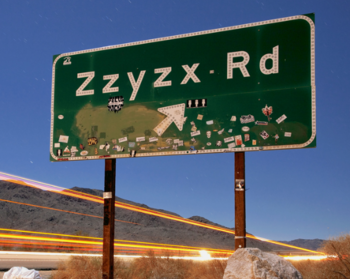 And then make a left turn on Fdsg Street...note Zzyzx Road is actually the name of a real road.
"Ar tonelico Qoga: Knell of Ar Ciel? There's only two real words in that verbal diarrhea!"
—Bennett the Sage, Anime Abandon episode: De:vadasy

There's the Word Salad Title, and then there's this. This isn't so much of a salad as the diced carrots on top of the salad. This trope comes into play when the creators deconstruct words, rearrange letters, or create new terms to name their works. This usually takes one of three forms:

This is usually justified by the Rule of Cool, and related to As Long as It Sounds Foreign. Sometimes the title is random due to ease of trademarking a non-generic word. See also The Unpronounceable, which is this trope taken Up to Eleven. The proper noun version of Perfectly Cromulent Word. In some cases, may overlap with Mad Lib Fantasy Title.