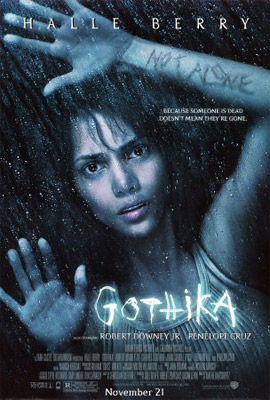 Gothika is a 2003 American supernatural thriller directed by Mathieu Kassovitz and written by Sebastian Gutierrez.

Halle Berry plays Dr. Miranda Grey, a psychiatrist in a women's mental hospital who wakes up one day to find herself on the other side of the bars, accused of having murdered her husband/boss Doug, and with an ominous gap in her memory from when it allegedly happened. To make matters worse, she is also being tormented by visions of a mutilated young woman and the message 'Not Alone' repeated in her life. Notable for a strong but under-used supporting cast, including Robert Downey Jr., Penélope Cruz, Charles S. Dutton, and Bernard Hill.