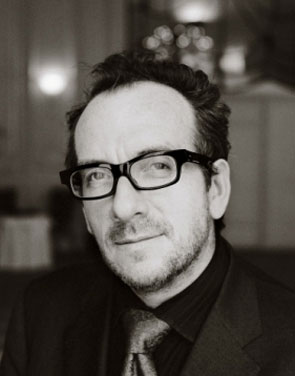 Veronica sits in her favourite chair, she sits very quiet and still,
And they call her a name that they never get right, and if they don't then nobody else will.
But she used to have a carefree mind of her own, with a devilish look in her eye,
Saying "You can call me anything you like, but my name is Veronica"
—"Veronica"
Advertisement:

Declan Patrick Aloysius MacManus OBE (born 25 August 1954), better known by his Stage Name Elvis Costello, is a sometimes popular and always respectable musician and songwriter who's been around since the late seventies.

He honed his skills playing in the pub rock band Flip City at night while working as a computer operator at Revlon's London branch. Soon after that, he signed a contract with fledgling record label Stiff and adopted a new name – an ironic Shout-Out to Elvis Presley (who died soon afterward) combined with his great-grandmother's maiden name.

Costello was initially associated in the public mind with Punk Rock, and in terms of attitude there was a resemblance. (He had enjoyed seeing the Sex Pistols go head to head with morning TV host Bill Grundy.) Musically, his closest kinship was to classic sixties pop: The Kinks, Bob Dylan, early Who and especially The Beatles. While he had a troubled relationship with his backup band the Attractions, they were highly suited to interpreting his diverse catalog of songs.

Although he is often associated with his use of puns and wordplay in lyrics, these are most noticeable in his early work. As he's matured, Costello's humor has become less brash and sarcastic, more jocular and self-mocking. His curiosity and desire to collaborate with others has - among other adventures — lead him to compose a score for the ballet, tour with T-Bone Burnett as a country duo, and write both an album's worth of songs with Burt Bacharach and yet another backed only by string quartet. Costello was inducted into the Rock & Roll Hall of Fame in 2003.

He's also an author. His first book Unfaithful Music & Disappearing Ink was released in 2015. While working on it, he denied it would be an autobiography. This is technically true - it's a memoir. It also took much longer than expected to write. Perhaps ending up more than double the length of the 300-and-some pages promised by the publisher had something to do with that.

He hosted two seasons of a music/interview show called Spectacle: Elvis Costello with... which aired on the Sundance Channel in the US and Channel 4 in the UK. Television has seen him being banned from Saturday Night Live for a dozen years for changing songs unannounced, subbing for David Letterman during his heart surgery, and appearing As Himself on The Simpsons and Talladega Nights: The Ballad of Ricky Bobby. Charges that he is an international art thief are still being investigated.

Everyday I Write the Tropes:

I'm sorry, ladies and gentlemen. There's no reason for me to do this song here.