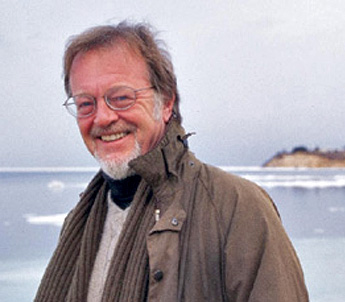 If your History teacher wrote novels.
"To keep on writing - every day. To wait for inspiration is a sure way to start Googling sites such as 'Exciting Careers in Accountancy'. And, new writers excepted, there is no such thing as writer's block. Okay, some days it's like swimming through treacle, but you still have to keep going. I'll believe in writer's block the day that a hospital accepts a nurse's absence because she has 'nurse's block'. His or her job is FAR more difficult than a writer's job."
— (On being asked what was the most important thing he'd learned in his writing experience).
Advertisement:

Bernard Cornwell (born 23 February 1944) is a British author of Historical Fiction, often about adventures in wartime.

He is most famous for the Sharpe novels, chiefly set during The Napoleonic Wars, which were adapted into a television movie series starring Sean Bean as Richard Sharpe.

Cornwell was adopted as a child by a strict Christian sect. He came to break all ties with them and took his mother's maiden name.

He worked for the BBC and other broadcast news media before becoming a novelist. He started writing fiction because he'd moved to the United States with his American wife and he couldn't get a Green Card at the time - writing required no work permits. (He's a U.S. citizen now.)

Cornwell was inspired by the Horatio Hornblower naval novels of C.S. Forester and decided to write stuff like that about the army. His first novel, Sharpe's Eagle, was published in 1981 and the rest is history. Four decades later, he's still at it, and has helped inspire other contemporary authors of historical fiction.

In 2005 he was made an Officer of the Order of the British Empire "for his services to literature and furtherance of British culture abroad."

with an active Q&A and bulletin board.

Not related to Patricia Cornwell.

Works by Cornwell include:

These and other works provide examples of: