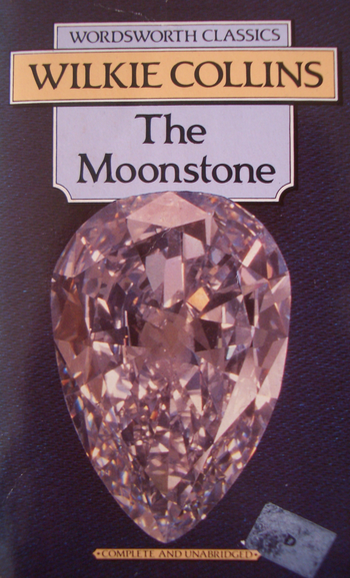 Published in 1868 as a magazine serial, The Moonstone by Wilkie Collins is English literature's first detective novel and still one of the best. The story is told by several different narrators who, according to the framing story, have been asked to write down their involvement by the hero.
Advertisement:

Lovely young Rachel Verinder receives an unexpected and (to her mother) unwelcome 18th birthday present from her late uncle, the family Black Sheep. Mr. Murthwaite, a famous explorer and one of the party guests, tells Rachel and Mrs. Verinder that the large yellow diamond was stolen from a Hindu idol 20 or 30 years before and that the Indian 'jugglers' who entertain the party are nothing of the kind but, most probably, Hindu priests trying to regain their sacred stone. That very night, the diamond disappears.

Rachel has two suitors, both her first cousins, Godfrey Ablewhite and Franklin Blake, staying in the house. It soon becomes clear that she suspects Blake of being the thief. The detective called in on the case, Sergeant Cuff, on the other hand, suspects Rachel herself, along with one of the maids, who has a criminal background. The true solution proves to be much more complex than either theory, involving several parties, all with their own unconnected motives.

The novel is noteworthy not only for codifying, if not originating, many Detective Fiction tropes, but for being a compelling work of social critique and examination. The narrators include the butler to an aristocratic house, a penniless spinster with a Vocation, and a doctor who is explicitly of mixed race. These are all characters on the fringe of Society, yet Collins gives them voices and important roles in observing and reporting the story's action. He also touches deftly on themes of imperialism and colonialism, as well as medicine and drug addiction.

Tropes found in the 1996 BBC adaptation:

Tropes found in the 2016 BBC adaptation: