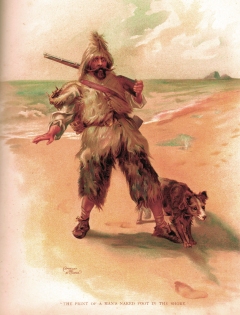 Written by Daniel Defoe and first published in 1719. Probably inspired by real-life castaway Alexander Selkirk. Depending on who you ask, it might be the first true novel written in English.

Robinson Crusoe is a classic novel about the title character's various adventures, the primary one being his shipwreck on a deserted island off the Caribbean coast of South America. After a tumultuous early life at sea, Crusoe is stranded on his famous island, where he learns important survival skills, fights off cannibal natives, saves a native prisoner (Friday, who becomes his loyal servant and friend) from being eaten, and so on until his dramatic rescue. It was an immediate success after its first release, which inspired a whole lot of imitators and stories using similar plots.