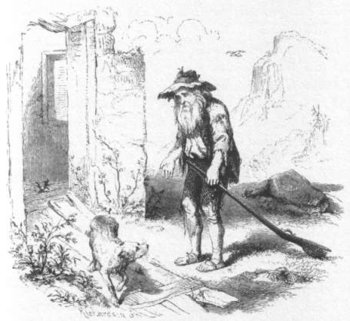 "Rip Van Winkle" is an 1819 short story by Washington Irving.

The story is set in upstate New York (namely, the Catskill Mountains) shortly before The American Revolution. Rip Van Winkle is a genial, well-liked colonist of Dutch extraction, whose only problem is a nagging shrew of a wife. To escape said nagging wife, Rip wanders off for a walk in the woods. There he meets a strange man in strange-looking antique Dutch clothes who offers him some homemade moonshine. He has a few drinks with the strange man and his even stranger, silent companions, and eventually falls asleep. He wakes up to find that he's grown a foot-long beard, his musket has rotted away, and his dog has disappeared. Walking back into town, Rip finds many odd changes...

Trope Namer for Rip Van Winkle note and, even if he is an aversion, Rip Van Tinkle. This story was published in the collection The Sketch-book of Geoffrey Crayon, Gent., along with another story that became very famous, "The Legend of Sleepy Hollow''. Irving became one of the most famous writers of early American literature. The story has been adapted many times for stage and screen, dating back to a 19th century play and one of the oldest narrative films ever made, an 1896 film of that play.