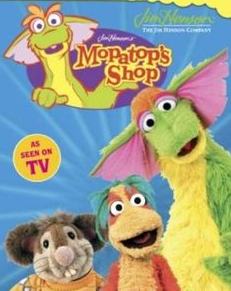 A British children's television series from Jim Henson Productions and Carlton Television that aired from 1999 to 2005 for 260 episodes, about a green fluffy creature named Mopatop who runs a shop that sells, in Mopatop's own words, "anything that you could ever think or dream of".
Advertisement:

Mopatop's shop has an assistant named Puppyduck, who is a hybrid duck/dog-like creature as her name would suggest. There was also a mouse character named Moosey Mouse who lived in the ceiling of the shop with his parents, and generally went unnoticed by Mopatop and Puppyduck when he was visiting the shop. The show depicted Mopatop and Puppyduck's interactions with customers, who generally wanted to buy stuff that no one would expect to find in a real store (e.g. an opera singer wanting to buy a partner to sing with, a fisher who wants a river to use his fishing equipment in, etc.).