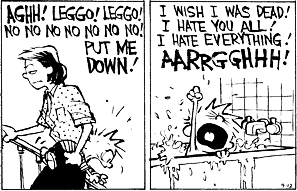 Tommy: Maybe a bad word is a word that people don't want to hear.
Phil: Well then, I know a really bad word: bath.
— Rugrats, "The Word of the Day"
Advertisement:

For some characters, one of the scariest things in the world is a bath. This is most commonly seen in young characters (especially boys), who often have to be dragged kicking and screaming to the bath tub. For adult characters it is usually a man whose wife forces him to take a bath. Other species, such as cats and dogs (especially cats), are often commonly depicted as disliking baths. However, this trope could apply to any age, gender, or species.

This trope is related to The Pig-Pen; however, a character who hates baths need not necessarily be unusually filthy or smelly.

This trope was a bit harsher in Real Life before roughly 1950s-60s when the modern bath detergents were invented. Before bubble bath, they involved gray soap and rigorous scrubbing.

It's time for Gary's bath, and he's less than enthused.

It's time for Gary's bath, and he's less than enthused.