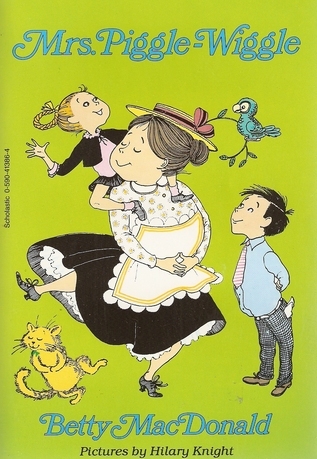 A series of children's books by Betty MacDonald about a small old lady who lives in an upside-down house. She spends her time curing children's bad habits with magical cures left by her dead husband. A light-hearted critique of modern parenting with two sets of Aesops, one for children about the fact there are consequences to their actions and one for parents about how it's important to let their children learn these things for themselves.

The stories were originally bedtime-stories she told to her daughters (Annie and Joan—see "The Fighter-Quarrelers Cure") and later her nieces/nephews and still later to her grandchildren. This accounts for some of the inconsistencies. (Some 'cures' being simple reverse psychology, others having an element of magic or fantasy.)

The original books are:

In 1994 the books were adapted into a short-lived TV series starring Jean Stapleton in the title role.

A fifth book was left unfinished at the time of Betty MacDonald's death in 1958. It was completed by her daughter, Anne MacDonald Canham (with illustrations by Alexandra Boiger), and published in 2007 as Happy Birthday, Mrs. Piggle-Wiggle.

on September 5, 2017. A third title, Missy Piggle-Wiggle and the Sticky-Fingers Cure, was released