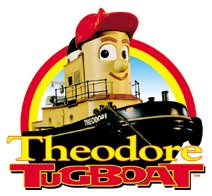 Theodore Tugboat is a Canadian children's show about the adventures of Theodore Tugboat and his friends George, Emily, Foduck, and Hank. The Harbourmaster (played by Denny Doherty of The Mamas & the Papas) introduces the stories.
Advertisement:

It was produced by Robert Cardona, co-producer of TUGS, making this a Spiritual Successor of said show. Both are centered on the harbour activities of a fleet of tugboats who wear hats. Unlike TUGS, which was set in The Roaring '20s and were essentially models mounted on trolleys pulled by fishing line, the setting of Theodore is much more modern and the characters are radio-controlled.

Theodore Tugboat is still very popular. To this day, a large-scale imitation tugboat built like Theodore himself, entitled Theodore Too, can be found in Nova Scotia. While the filming models can be viewed at the Maritime Museum of the Atlantic, located in the show's setting (and filming location) of Halifax, Nova Scotia.

Thanks for visiting us here at The Big Harbor. We'll see you all again next time!