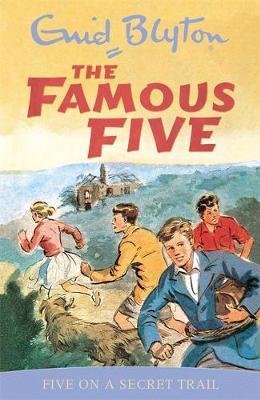 The Famous Five is the name of a series of children's novels written by British author Enid Blyton. The first book, Five on a Treasure Island, was published in 1942.

The novels feature the adventures of a group of five children (well, four children and a Team Pet) — Julian, Dick, Anne, George, and the dog Timmy note Which is how everyone remembers the dog's name. But in Five on a Treasure Island he is "Tim" or "Timothy" throughout. Blyton created several similar groups for her detective series, including The Secret Seven, The Adventurous Four (not to be confused with The Adventure Series) and Five Find-Outers, but the Famous Five is the best-known and most popular of these.

Blyton only intended to write about 6 to 8 books in the series but, owing to their high sales and immense commercial success, she went on to write 21 full-length Famous Five novels. By the end of 1953, more than 6 million copies of these books had been printed and sold. Today, more than two million copies of the books are sold each year, making them one of the biggest-selling series for children ever written. Over a hundred million books have been sold, and nearly all of the original novels have subsequently been adapted for television (the first TV series in the late 1970s adapted all but three of them, missing out two due to rights issues and another because it was impractical to film on the available schedule, and a later mid-90s series managed a full house). A stage musical combining the first two books toured in the UK in 1997, known as ''Famous Five Smuggler's Gold", starring Alison Hughes and Jon Lee.

Advertisement:
Novels in this series

Such was the series' popularity in France that after Blyton's death Claude Voilier, who had translated the original books into French, wrote a series of 24 more officially-licensed Five books, which were published between 1971 and 1985, and all but six of which were also translated into English. Two original books apparently written by the series' German translator in the late seventies also exist, but they were recalled almost immediately due to not being properly licensed.

This series includes examples of