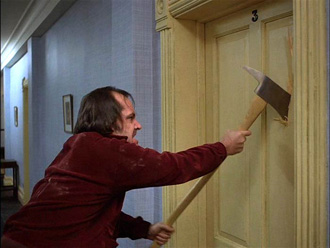 So, Bob's taken a trip down Ax-Crazy road, and his terrified Love Interest, Alice, is hiding in a locked room, praying she will be safe. She isn't in any less danger, of course; once Bob discovers her hiding place, he will immediately try to break the door down to get at her. Technique varies, but he may employ such time-tested classics as striking the door with an axe, pulling at the door from the outside, throwing his body against the door, or breaking a glass panel and putting his hand through in an attempt to unlock the door from the inside.

All this takes time, of course, and in the meanwhile the camera (and the audience's sympathy) will be with the frightened Alice crouching in a corner, listening to Bob's assault on the door and hoping it will hold...

A specific form of "Open!" Says Me. Compare to There Was a Door for when somebody's so impatient, they just break through the wall instead of the door. Or Shoot Out the Lock, when they resort to guns instead.

Normally involves An Axe to Grind; however, it may also involve other melee weapons such as hammers, saws, or brute strength.