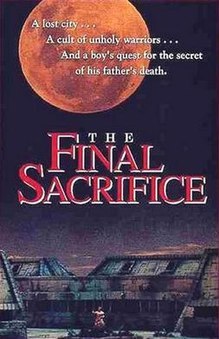 A lost city... A cult of unholy warriors... And a boy's quest for the secret of his father's death.
— The tagline
Advertisement:

The Final Sacrifice is a noble but doomed attempt to produce an old-fashioned adventure film in rural Canada with an ultra-low budget of around $1500 and an inexperienced cast and director. It is best known thanks to its appearance on Mystery Science Theater 3000.

Ruled by the evil Satoris, an ancient cult of Canadian wrestlers is bent on world domination. Instrumental to their plan is a map to the ancient Ziox cult idol, recently discovered by young Troy McGreggor. When the cult invades his home to recover the map, he flees and ends up in the bed of a passing pickup truck, driven by the film's hero—a burly, surly Randy Bachman-lookalike hilariously named Zap Rowsdower. At first, Rowsdower considers turning Troy over to the police, but after the boy helps him to fix his broken-down truck and Rowsdower helps Troy escape from the cult leaders again, he decides to let Troy stay with him. Rowsdower and Troy become friends and together search for the lost idol before the cult can claim it and take over the world.

The map leads Troy, and eventually Rowsdower, all over Alberta, through some unlikely caves, and finally to the unkempt shack of a hairy, grizzled fugitive by the name of Mike Pipper. Pipper, a partner of Troy's late father and archaeologist who studied the ancient Ziox civilization, has been hiding in the woods from Satoris for seven years (who never found him, even though it took Troy and Zap a few days at most). Pipper reveals that the cultists are the last descendants of the Ziox, an ancient culture whose civilization was destroyed by their god after they turned away from it and worshiped an evil idol instead. According to Pipper the Ziox built a great city that was more advanced than "anything the ancient Egyptians or Romans ever knew", but their god sank the city in a month-long rainstorm.

Eventually, Troy is captured by Satoris and his cult. Satoris means to make Troy the titular final sacrifice, which will give him an army of invincible zombie warriors. It's up to Rowsdower to save Troy and put an end to the cult's activities.

Directed by Tjardus Greidanus, a film student at the Southern Alberta Institute of Technology, it utilized a cast of local theater actors and fellow students. It received a VHS release under the title Quest for the Lost City, and occasionally aired on Canadian television in the early '90s, but remained extremely obscure until it was discovered by Best Brains and featured on MST3K.

Not to be confused with Children of the Corn II: The Final Sacrifice.

The Final Sacrifice contains examples of: