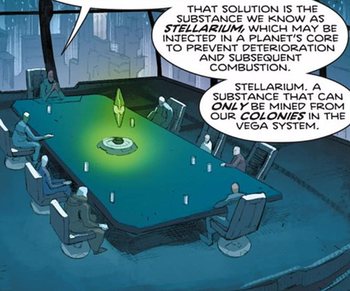 Unobtainium is engineering jargon for, "a material that would be perfect for our purposes, if we could get it, which we can't." Sometimes an object that actually exists, or existed at one time, becomes unobtainium because it's unavailable now. When used in the realm of fiction, Unobtainium is usually the exotic material that is needed to make the Applied Phlebotinum of a given story work. Without it, all your nifty machines and plot-enabling gadgets quit functioning.

Some forms of unobtainium are based on real physics, but beyond the current scope of human engineering, such as room-temperature superconductors

; they would revolutionize just about every form of technology, but they are not in and of themselves dangerous or based on some exotic physics-bending principle.

Others are more fantastic "high-grade" unobtainium, such as antimatter, which would be a revolutionary way of storing huge amounts of energy, if it didn't violentlynote as in, 1 gram = tactical nuclear weapon yield undergo mutual annihilation with any conventional matter it comes into contact with, including air molecules and the walls of whatever you're trying to store the damn stuff in.

The most common varieties of unobtainium in fiction sit somewhere in the middle, like materials so resistant to heat and/or damage as to be Nigh Invulnerable compared to other, similar substances. Materials such as mithril are the fantasy version. Thunderbolt Iron is especially popular in fiction (and has some basis in reality – until smelting was invented (which takes ridiculously hot - 1250 °C or 2282 °F - furnaces, hence the term "Iron Age"), it was the only source of refined iron).

Much mad science uses unobtainium, such as chemicals with impossible properties, universal solvents that can dissolve anything in the blink of an eye, super-explosives that make nitroglycerin look like a weak cough, and plenty of other funny-colored solutions. Following this would be medical and/or chemical wish-fulfillers; Classical real-world alchemy casually referred to carmot, the base substance of the Philosopher's Stone, and Azoth, either the "universal medicine" or "universal solvent". The ancient Greek writer Plato referred to "Orichalcum" (Greek for "mountain bronze") in his description of Atlantis.

In Science Fiction, it will usually take one of three flavors: whatever stuff makes Faster-Than-Light Travel possible, closely followed by the stuff that can mess with gravity (if they're not one and the same), and finally, the stuff they make Humongous Mecha and Alien spacecraft out of, which is why they tend to be effectively immune from earthly weapons or environmental damage.

For Willing Suspension of Disbelief, authors may pick out something actively being researched within the scientific community at the time of writing and run with it. Naturally, this risks dating the work when Science Marches On and today's "super technology" buzzword becomes the next generation's comic-book junk science. The current favorite in hard sci-fi is helium-3

– believed by many to be the fuel of choice for those nifty fusion reactors that should be perfected any time now. Theoretically, it's a safe large-scale energy source with few environmental side effects. But more importantly, though, there's extremely little of it on Earth; on the Moon, it's Not Rare Over There — which would provide a good reason to go there.note Though as explained here

(roughly halfway down the page), helium-3 is actually very rare even on the Moon, with a concentration measured in parts per billion. Then there's proton-boron fusion, an alternative fusion reaction using a fuel much more abundant than helium-3, but which has received much less attention, probably because it doesn't provide a convenient justification to go to space.

The term "Unobtainium" originates from aerospace engineers in the late 1950s, where it was used as a Hand Wave for a material sufficiently strong, light, and/or durable to meet the needs of a particular situation under discussion, even if no known material could possibly do so. It has occasionally been used in official discussions to avoid directly identifying a material whose use is still considered top secret (such as the titanium skin in the project that eventually produced the SR-71 Blackbird). Most people, however, first heard the term as the mineral sought by the mining company in Avatar, and mistakenly think that is the Trope Namer. It was also infamously noted in The Core.

See Also: Minovsky Physics when the Unobtainium has well-thought-out properties that are strictly adhered to, and its opposite, Green Rocks, when it can do anything and everything the plot demands.