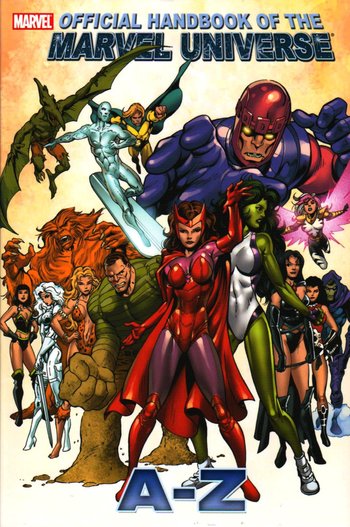 This is just one of many handbooks.
Advertisement:

Several series from Marvel Comics describing its characters in encyclopedia format. The project was instigated by Promoted Fanboy and popular writer and editor Mark Gruenwald; another prominent OHOTMU creator is diagram artist Eliot R. Brown. The first OHOTMU-style pages came as back-ups in the three-issue miniseries Contest of Champions (1982) (also written by Gruenwald) and proved popular enough for Marvel to go with a full-sized series containing nothing but encyclopedic entries.

Compare with DC Comics' equivalents, Who's Who: The Definitive Directory of the DC Universe and Secret Files and Origins.

Tropes related to the OHOTMU: