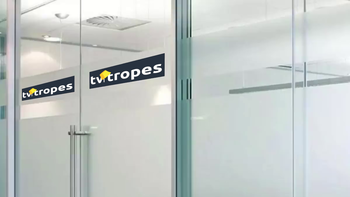 "So, you have a TV Tropes article for me?"
"Actually, it's gonna be super easy, barely an inconvenience."
Advertisement:

Ryan George plays a Screenwriter pitching an existing movie to a Hollywood Producer (also played by Ryan George, without his glasses). Most of the humor comes from the Screenwriter's enthusiastic recounting of a famous movie or TV show in a pitch, often accentuating the flaws to the Producer, who in turn is adept at spotting the problematic aspects of whatever he's being pitched but is too much of a profit-obsessed doormat to actually force any change (unless it's for the worse). Further humor comes from the fact that the Screenwriter's story decisions often bring serious questions about his thought process.

where he describes re-watching Back to the Future as an adult. Much of the routine takes the form of two execs discussing the movie's pitch together.

The videos, which are normally uploaded on Tuesdays, were originally only found on Screen Rant's YouTube channel

, but later got their own channel

Compare with Screen Junkies' Honest Trailers, which the show has referenced (and guest starred in).

The Screenwriter doesn't remember that time they used Khan's blood to revive Kirk.

The Screenwriter doesn't remember that time they used Khan's blood to revive Kirk.