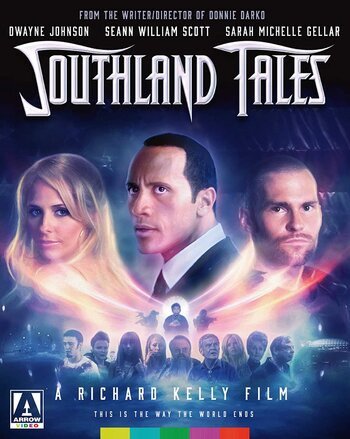 I've got soul, but I'm not a soldier.
"This is the way the world ends. Not with a whimper... but with a bang."
— Inversion of a poem by T. S. Eliot
Advertisement:

Southland Tales is a 2007 Science Fiction/Black Comedy film from director Richard Kelly, the follow-up to his 2001 cult hit Donnie Darko.

Imagine if you will the skewed artistic sensibilities of Andy Warhol filming a Greatest Hits version of Philip K. Dick's body of work, written with the esoteric denseness of Pixies lyrics, and you'll have something approximating the, er, experience that is Southland Tales. The film's cast is an eclectic group, led by names like Dwayne Johnson, Sarah Michelle Gellar, Seann William Scott, and narrator Justin Timberlake, while the secondary cast is filled with character actors and comedians, specifically Saturday Night Live veterans.

The sprawling story is difficult to summarize but here's a thumbnail version: after a nuclear attack in Texas, World War III has begun and the fuel supply of the United States is placed under strain, while the government becomes an authoritarian police state to combat the everpresent threat of terrorism. A genius inventor named Baron von Westphalen, a dandy who dresses like Liberace crossed with Ozymandias from Watchmen, joins forces with a Republican presidential candidate to create a wireless power generator that uses ocean currents to transmit electricity via quantum entanglement. This wireless energy, dubbed Fluid Karma, is derived from a compound that's also an injectable drug allowing the user to "bleed" his or her consciousness through space and time, but you'd only know that if you read the graphic novel prequels. The tidal generator appears to be sending out dense waves of fog, causing red tides, and oh yeah, ripping holes in the fabric of time and space. Meanwhile, the police state has created widespread discontent among the population and, in a Self-Fulfilling Prophecy, created actual terrorists in the form of neo-Marxist cells dedicated to overthrowing the government agency responsible for monitoring the American population, USIDent, spearheaded by the aforementioned presidential candidate and his wife.

And that last paragraph? That's all backstory delivered in the first ten minutes by Justin Timberlake, who's using Fluid Karma to narrate the story. The actual movie hasn't even started yet.

The plot is a Four Lines, All Waiting series of vignettes about a loosely-interconnected group of people living in the southland and plotting conspiracies either for or against the police state, although along the way it morphs into a metaphysical odyssey about the apocalypse requiring more than a passing familiarity with the Book of Revelation to make sense of, not to mention essential exposition available only in the graphic novel prequels. And even then, some things happen that have no rhyme or reason.

that both theatrical and Cannes version of the film have been restored in 4K. While the Cannes cut's special effects still haven't been finished, the new edit ("Version 3.0") is in development, and combines the Cannes version (with improved effects) and animations based on prequel graphic novels along with live-action scenes from The Power screenplay the character Krysta Now wrote. Time will tell if this version gets to see the light of day.

Pilot Abiliene: They say the path down the road not taken concludes with a stairway to heaven. The gates would not open for another three days, and Boxer Santaros was searching for the key.